No visit to Copenhagen is complete without seeing the Little Mermaid (Den lille Havfrue in Danish). Sitting at the entrance to Copenhagen harbour, despite being only 1.25m tall she is probably the most photographed lady in the whole city.

The statue is based on the fairy tale by Hans Christian Andersen written in 1837. It tells the story of a mermaid who gives up everything, even the ability to speak, to be with a handsome prince on land. The story has a tragic ending, which is shown by the somewhat sad look on the statue’s face.

The statue itself was first unveiled in 1913, having been commissioned by Carl Jacobsen, son of the founder of Carlsberg beer. He was struck by the beauty and tragedy of the character having watched a ballet version of the fairytale, so ordered the statue to be made.

She’s easily accessible, being equally visible from land and water. We’d recommend one of the following ways to get there:

Rent a bike and cycle there. It’s a lovely cycle along the harbour front, and takes only 5 minutes from Amalienborg (the Queen’s residence).

Use the hop on – hop off bus service. It stops just by the Little Mermaid and allows you to see many other great sights too.

Embark on a canal boat tour. See her from a different perspective and have an guide tell you all about her while you take photos. 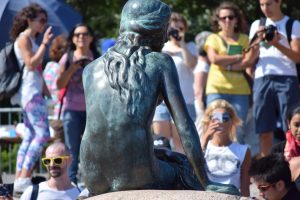 Go early if you want a picture with her The Little Mermaid is Copenhagen’s busiest tourist attraction, so to avoid the crowds get there as early as possible.

It’s completely free so you can enjoy her for as long as you like without having to pay a single kroner.

Read the information on display next to the statue. Most people ignore it, not fully understanding her story. A little knowledge will allow you to enjoy her company even more.

Copenhagen Card: Free Admission & Transport all over the city